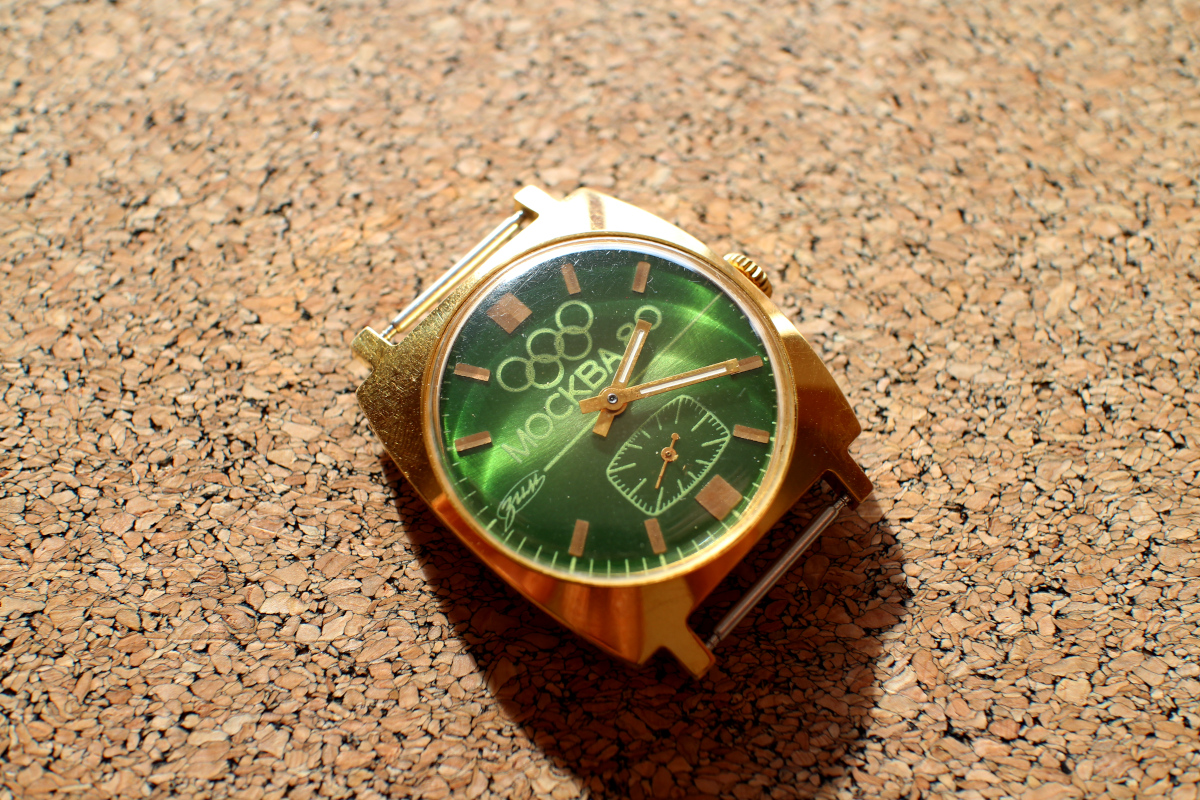 But thanks to a meeting with the hero of today’s publication, I learned a lot from the history of my country. In short, the Olympic Games were held in the summer of 1980 and the bulk of the competition took place in Moscow. The rest of the competition fell on the shoulders of such large cities as Leningrad, Minsk, Kiev and Tallinn. And this was the first Olympics in the history of games on the territory of a socialist state. Here is food for those who criticize the USSR. Will these countries be able to host the Olympic Games on their territory, given their high cost?

Of course, politics could not be avoided even then, because about 60 countries decided to boycott the Olympics in connection with the introduction of Soviet troops into Afghanistan … Or was this just an excuse …

But a lot of money was spent on the preparation and holding of the games. In order to somehow replenish the budget and to promote the Olympics-80, a huge number of lotteries, literature, stamps, coins, badges, posters, souvenirs dedicated to this event were issued. The clock also did not stand aside.

Today we will talk about the ZIM line of watches dedicated to the past Summer Olympics in the USSR in 1980 in Moscow. The ZIM watch had several colors in the design of the dial, and was also available in various cases and with different finishes.

By the way, ZIM stands for “Maslennikov Plant” and it was located in the city of Samara, where it existed from 1909 to 1990.

Appearance and characteristics of ZIM Moscow 80 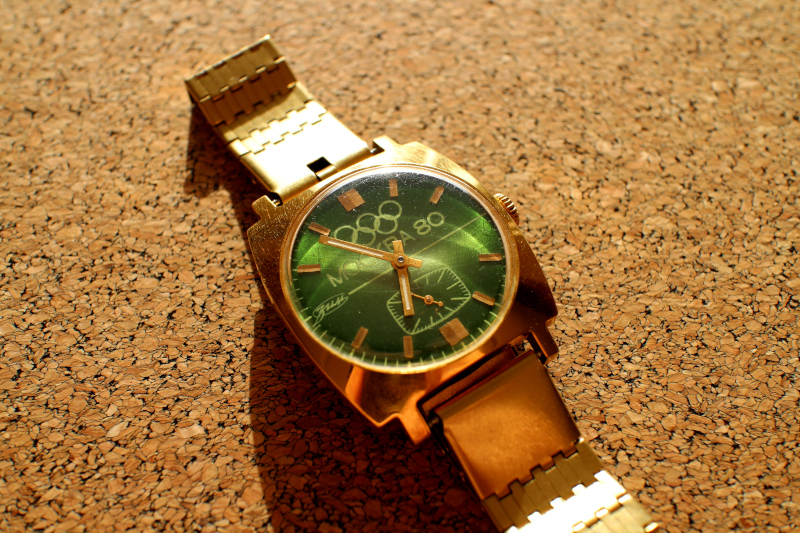 The watch case has a rectangular-convex shape, and the silhouette of the watch resembles a pillow.

One of the main features of this watch is its gilded case, which we are proudly told by the brand (test) in the form of the inscription AU10, where 10 means the thickness of the gilding in microns. 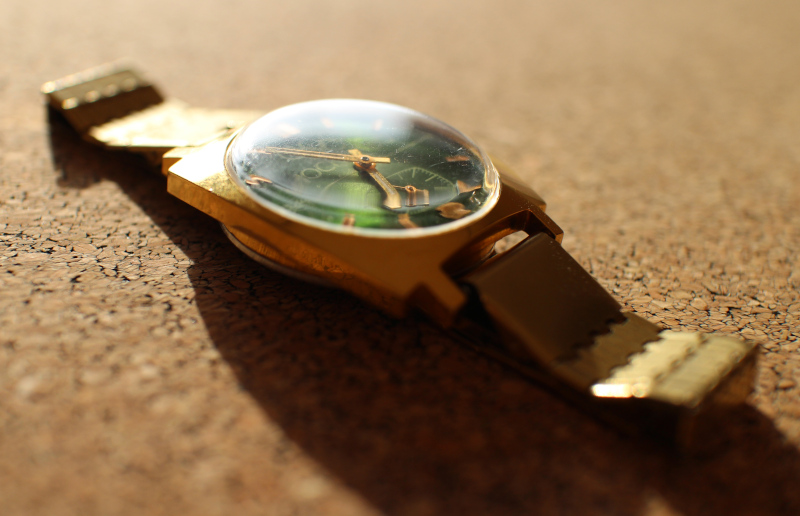 The weight of a watch with a bracelet is only 46 grams, without a bracelet – 32 grams. 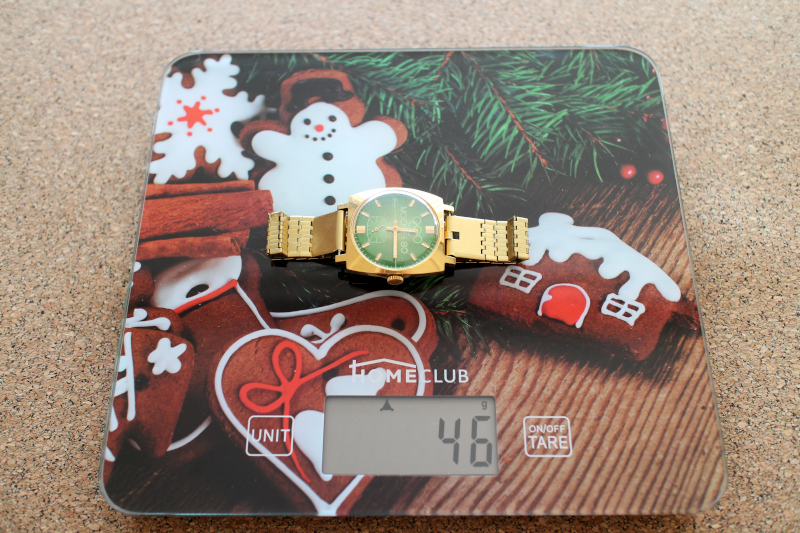 The dial in the watch is painted in bright green color and has a completely flat shape. The only exception is the golden convex marks that are glued on top of the dial. The diameter of the dial is 30.4 mm. 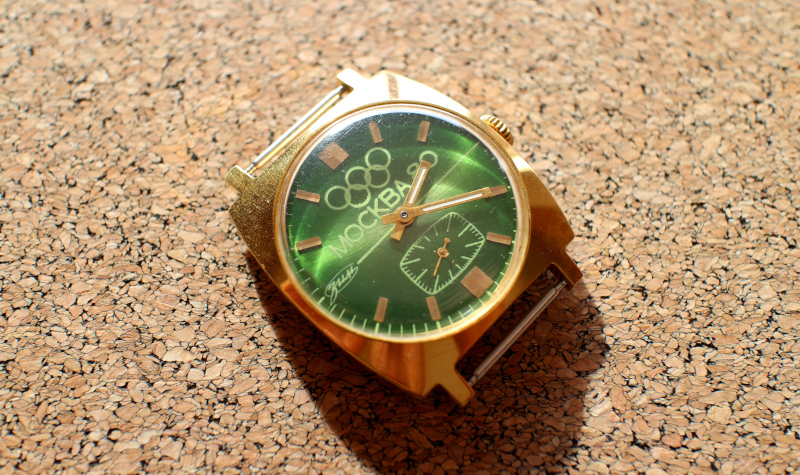 At the top of the dial are the Olympic rings and the inscription MOSCOW 80. A horizontal line with the logo of the plant runs in the middle of the dial. At the bottom there are only marks for the side second hand. Numeric marks on the dial are missing. 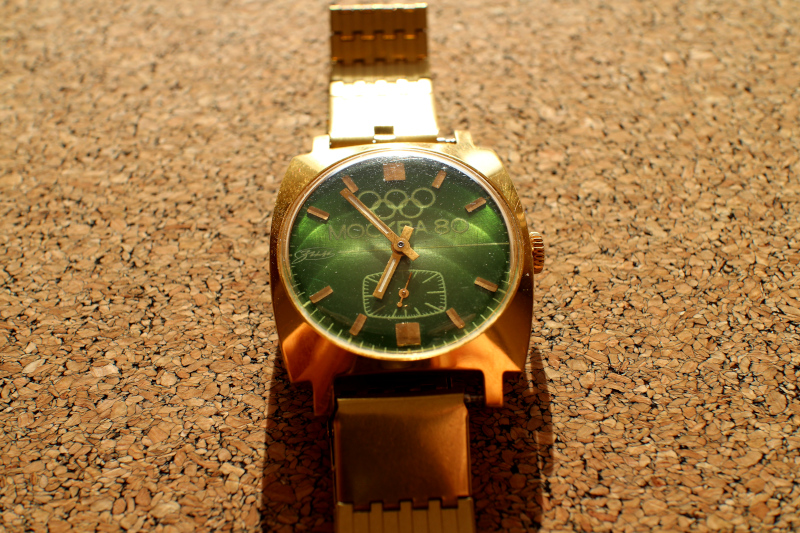 All the hands in the ZIM Olympiad 1980 watches are gold-plated, but given the amount of corrosion on the second hand, she got the least gold. Since the second hand is not located on the central axis, it is a watch with a side second hand. 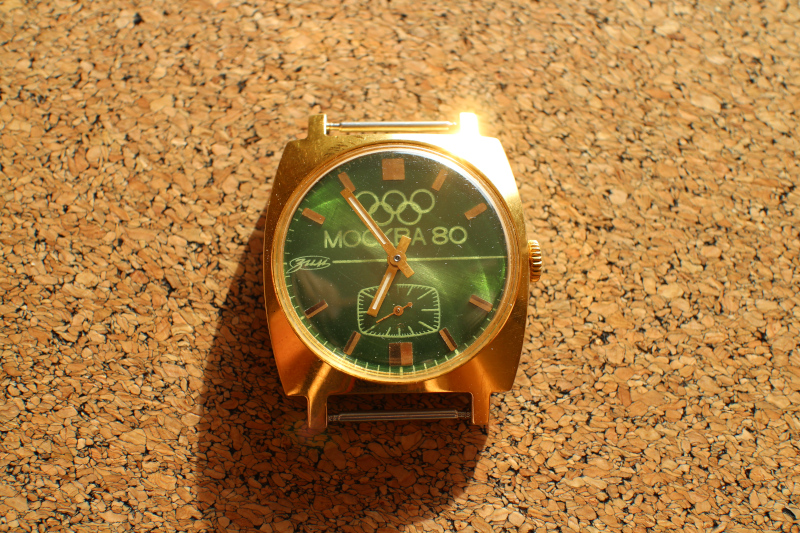 This arrangement of the second hand can be considered a tribute to history, because the pocket watch originally had a side second hand, and the first watch was a remake of the pocket. 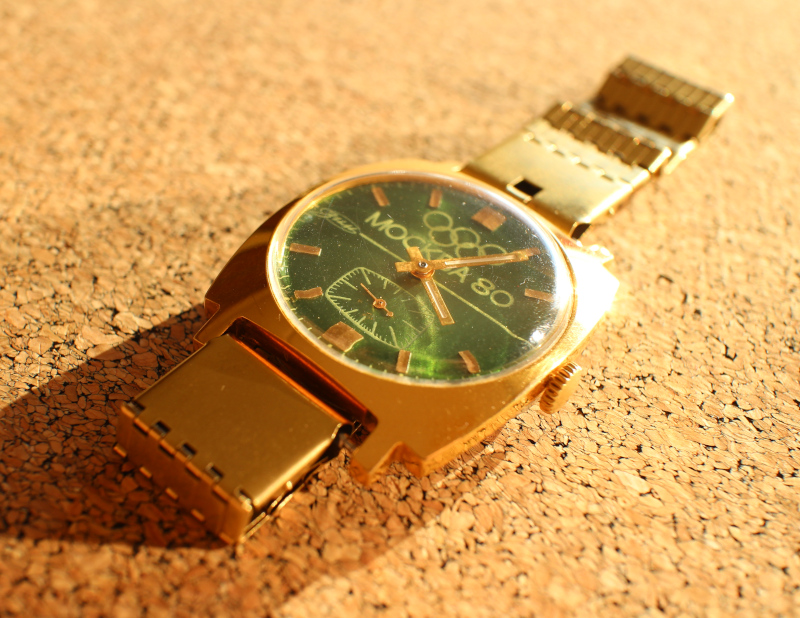 The hour and minute hands are covered with a luminescent composition, but unfortunately, for 40 years it has completely burned out.

The crown is quite narrow, but since its diameter is 5.5 mm, it is quite convenient to use. Logos are missing. 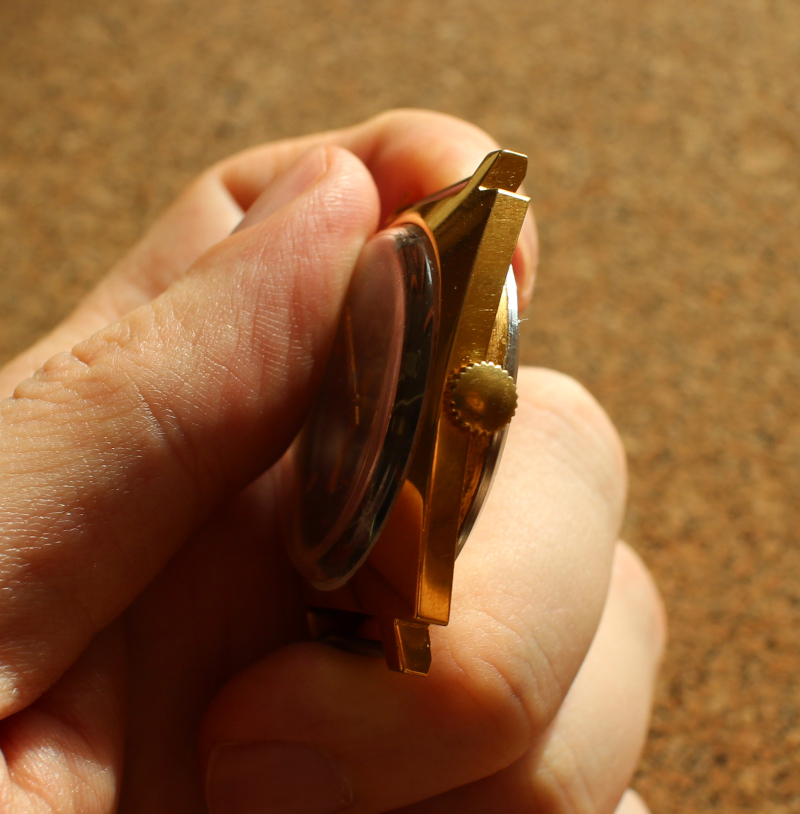 The case back is made of stainless steel and does not have any inscriptions. Since there is no protection against moisture and dust, the lid has no threads and only slams. 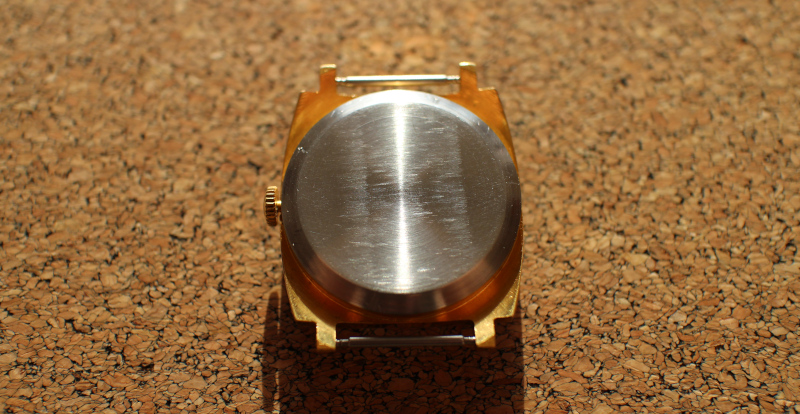 Traces of attempts to open the back cover are clearly visible.

The watch itself is mechanical and a clock mechanism of caliber 2602 (GOST 10733-79) of the second accuracy class is installed inside, which guaranteed an error of -30 to +85 seconds per day and a power reserve of 35 to 39 hours. 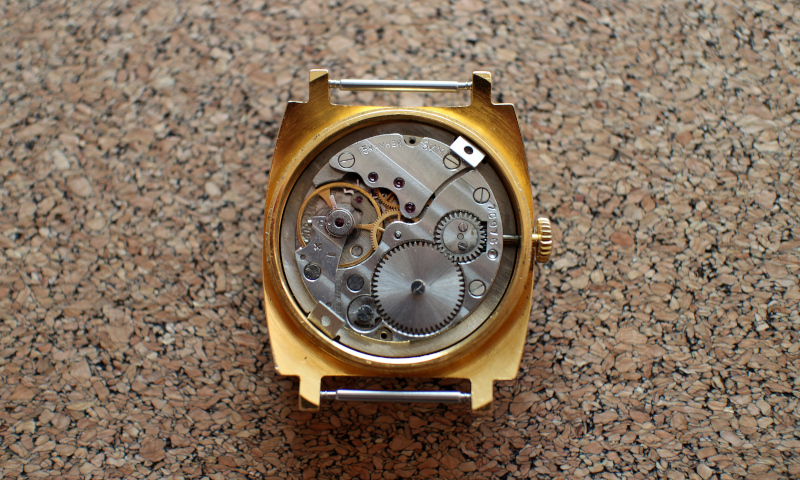 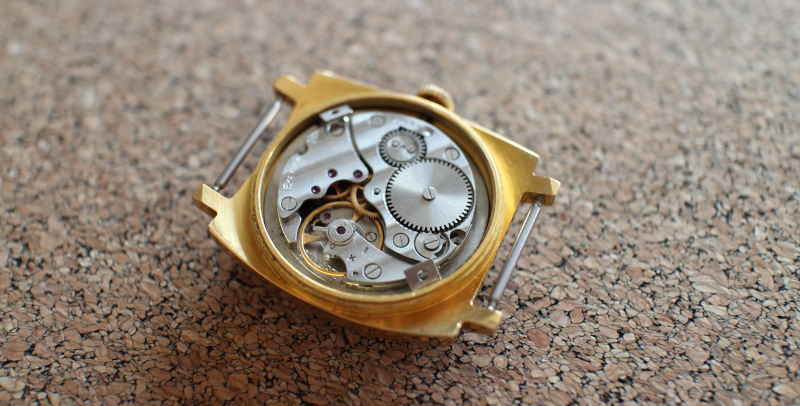 Now the power reserve of the mechanism at one full factory is 26 hours, and the watch itself is 3 minutes and 40 seconds behind.

The width of the strap is standard for those times 17.8 mm. If anyone does not know, then all watches in the days of the USSR were sold without a bracelet or strap, they had to be bought separately.

So in this case, when I bought a watch from the former owner, I did not expect to see a “native” bracelet, but what was my surprise when the seller decided to hand me this golden bracelet made in the same time period as a gift as the watch itself.

Unfortunately, the strap itself is not gilded, but made of stainless steel and its price used to be 3 rubles 80 kopecks, as evidenced by a stamp on one of its ends. 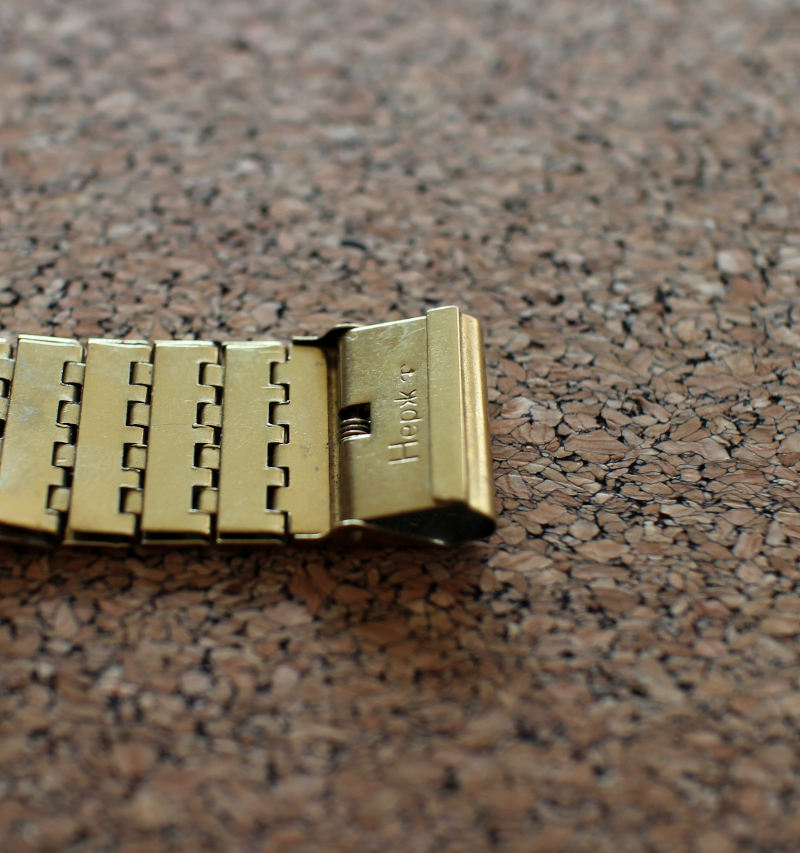 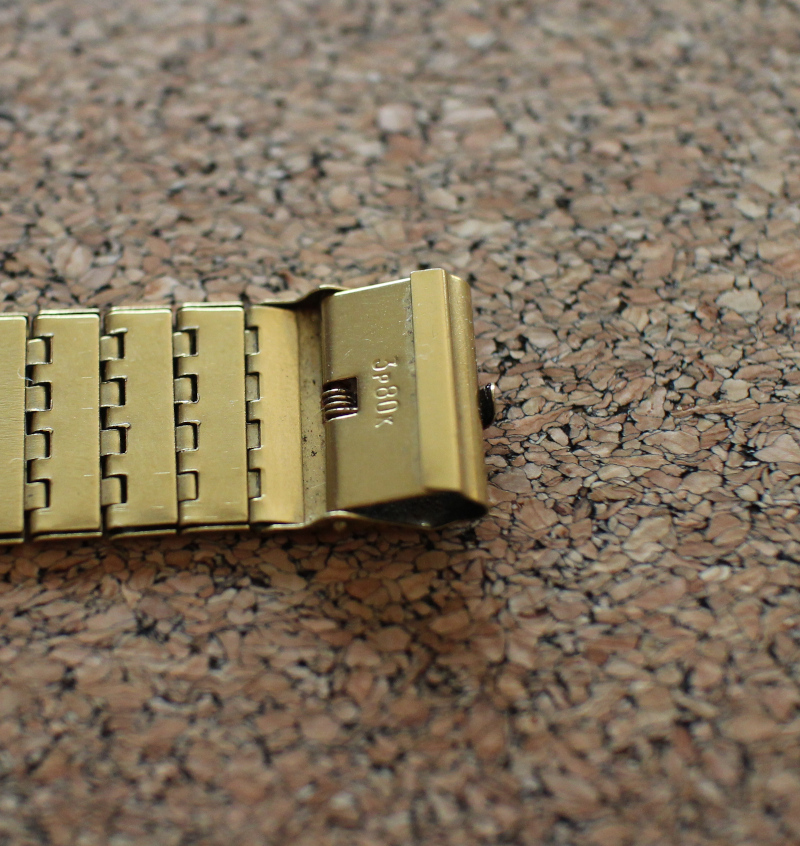 Nevertheless, the bracelet itself is in perfect harmony with the watch. Its advantage is that it is installed or removed, it is not necessary to disassemble the clock in any way. Everything is quickly and elegantly removed. 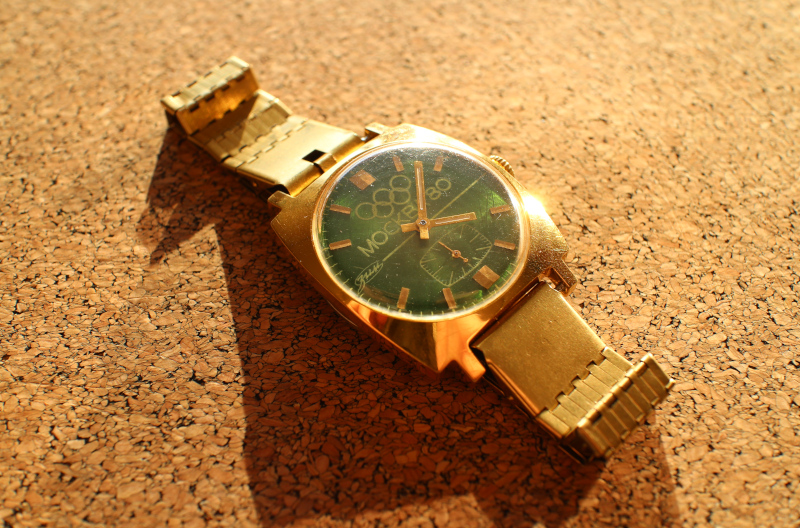 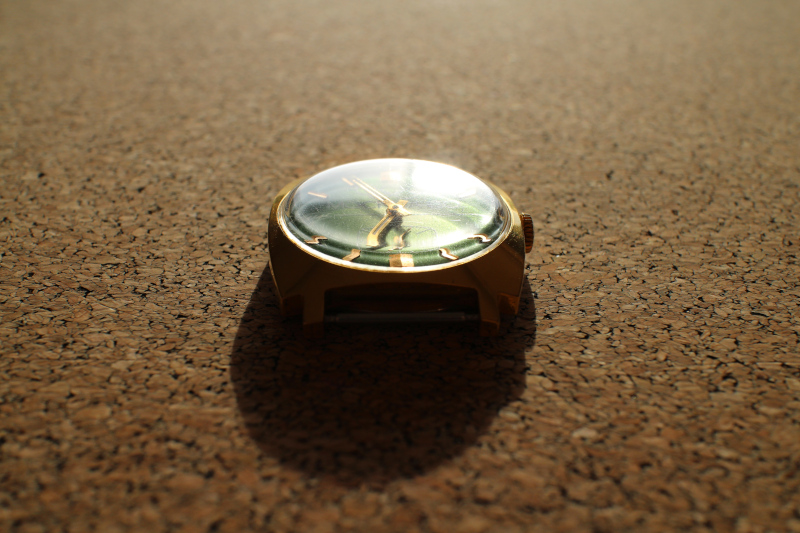 These watches were able to survive their creators, because the USSR has long been gone, and the Maslennikov Plant was closed due to bankruptcy. And with all this, they are perfectly preserved and continue to confidently move forward, delighting their owners. Moreover, this summer marks exactly 40 years since the opening of the Summer Olympic Games in Moscow. So I advise you to follow the example and move forward, despite the difficulties, and these watches will take pride of place in my collection, because they contain not only a nice design and interesting performance, but also a piece of history. 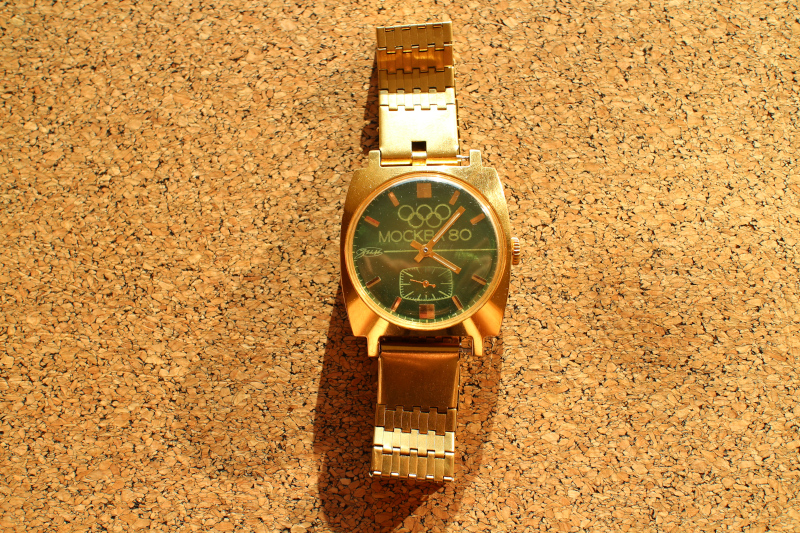 That’s all for today!

Thank you all for your attention!